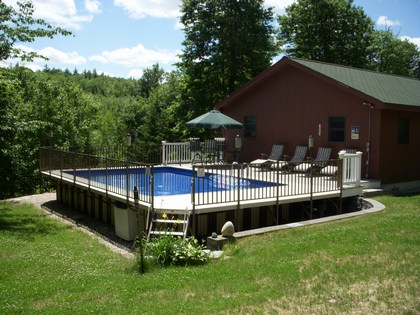 We have a 16×24 Gibraltar pool that we purchased in the fall of 2006. The workers that came to install the pool were professional, paid attention to detail, and finished the job in a timely fashion. The majority of the yard work was completed before the harsh New England winter was upon us. The following spring, we opened our pool. The water was as crystal clear, and it took no time to be up and running for the summer. The summer of 2007 proved to be an easy year for pool maintenance, we only vacuumed the pool three times and the cost of chlorine was minimal. The pool filter proved to be more than adequate to keep the surface of the water clear of bugs and debris.

That fall we added a deck that extended from our house to the existing deck on our Gibraltar pool. We informed the pool installers of our plan when they installed the pool and through their precise placement of the pool and the carpenter’s expertise, the two matched up perfectly. The winter of 2007/2008 brought us record-breaking snowfall. There was more than three feet of snow on the deck of the pool, and we did not shovel it during the winter. We opened our pool in spring of 2008, confident that our Gibraltar pool, dubbed “The Tank”, would reveal no damage whatsoever. The pool looked as if it was ready to swim in that day, except for the sixty-five degree water.

This summer, the chemical costs are still low, and (despite having trees very close to our pool) it has only been vacuumed three times. Just recently, a tornado touched down in central New Hampshire and passed just two miles from our home. Although we did not sustain heavy damage from the tornado, the storm brought over five inches of rain, tree limbs, and leaves. Once again, “The Tank” emerged from the storm unscathed. We drained the pool of the extra five inches of water it now contained, and were swimming in it the next day.

Our pool brings the family together in a positive way. We have two teenage children, a dog, and a cat; and we all love lounging by the pool on a hot summer day. The pool has been a highlight of family cookouts, teenage parties, and relaxing weekends for almost two years now; and it still looks like as if it was just recently installed. We are confident and excited that “The Tank” will bring us many years of enjoyment in the future.

Thank you Gibraltar for a quality product, well done.